Romans 4:3 – 8 — “For what saith the scripture? Abraham believed God, and it was counted unto him for righteousness. Now to him that worketh is the reward not reckoned of grace, but of debt. But to him that worketh not, but believeth on Him that justifieth the ungodly, his faith is counted for righteousness. Even as David also describeth the blessedness of the man, unto whom God imputeth righteousness without works, saying, Blessed are they whose iniquities are forgiven, and whose sins are covered. Blessed is the man to whom the Lord will not impute sin.”

God also has an accounting system.  It is a quite simple system.  The balance sheet shows righteousness as credits, and unrighteousness as sins (falling short), trespasses (going past what is lawfully allowed), and iniquities (pure evil).  Notice that it is righteousness, and not religiousness.  A statement of what is in those accounts is summed up in the previous chapter in Romans:

Romans 3:10 – 20 — “As it is written, There is none righteous, no, not one: There is none that understandeth, there is none that seeketh after God. They are all gone out of the way, they are together become unprofitable; there is none that doeth good, no, not one. Their throat is an open sepulchre; with their tongues they have used deceit; the poison of asps is under their lips: Whose mouth is full of cursing and bitterness: Their feet are swift to shed blood: Destruction and misery are in their ways: And the way of peace have they not known: There is no fear of God before their eyes. Now we know that what things soever the law saith, it saith to them who are under the law: that every mouth may be stopped, and all the world may become guilty before God. Therefore by the deeds of the law there shall no flesh be justified in his sight: for by the law is the knowledge of sin.”

So there is no one that is righteous.  The righteousness (credit) side of the account that belongs to all of mankind is empty of anything of value to God.  To make things worse, the debt side of the balance sheet is full. It would have a balance of ∞ — infinity. It is a debt that cannot be paid.  It only makes matters that much worse when we see that the credit account is bone-dry.  Even worse than an empty account is that the deeds of the law, i.e. man trying to do good, and really all of the best that we have to offer is worthless to our creditor.  We have only the wrong currency.

But let’s look at the first passage again:

Romans 4:3 — “Abraham believed God, and it was counted unto him for righteousness.”

Righteousness was counted to him, when he…believed God!  As stated earlier, our best attempt at good works is simply the wrong currency.  No flesh will be justified by them.  Period.

Romans 4:5 — “But to him that worketh not, but believeth on Him that justifieth the ungodly, his faith is counted for righteousness.”

So now there is hope, and it is hope for the ungodly.  As Abraham believed God and it was counted unto him for righteousness, so is it for us who believe on Him who justifies the ungodly.  This counting righteous is well thought of as a deposit into the credit side.  Remember that side of your account that was completely empty of anything of value?  It now has righteousness!  It has the righteousness of God:

Romans 3:21 – 26 — “But now the righteousness of God without the law is manifested, being witnessed by the law and the prophets; Even the righteousness of God which is by faith of Jesus Christ unto all and upon all them that believe: for there is no difference: For all have sinned, and come short of the glory of God; Being justified freely by His grace through the redemption that is in Christ Jesus: Whom God hath set forth to be a propitiation through faith in His blood, to declare His righteousness for the remission of sins that are past, through the forbearance of God; To declare, I say, at this time His righteousness: that He might be just, and the justifier of him which believeth in Jesus.” 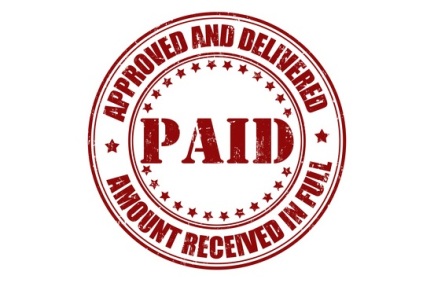 We are justified (declared to be righteous) completely by God’s grace.  It is an absolutely free gift.  That deposit to our account is the most valuable and expensive gift imaginable, and it is given to the one who believes God freely.  Do not ever speak of “cheap grace”!  Nothing that is bought and paid for with the precious blood of the Son of God is cheap!  But it is given to us freely!

Romans 4:6 – 7 — “Even as David also describeth the blessedness of the man, unto whom God imputeth righteousness without works, Saying, Blessed are they whose iniquities are forgiven, and whose sins are covered.”

Did you read that…forgiven!  The debt is clear!

Ephesians 1:7 — “In Whom we have redemption through His blood, the forgiveness of sins, according to the riches of His grace…”

The sin and unrighteousness in our account is cleared…according to the riches of His grace! 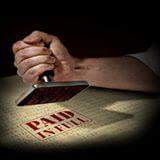 So now we have an account with God’s infinite righteousness, and a debt account with a zero balance.  There is still one issue.  It is the same issue that is true of our finances.  A zero balance credit card seldom stays that way.  Except for God’s intervention on our behalf, this would be true of our debt.  We would pile the debt back up to infinity in no time.  But let us look again at verse 8:

Romans 4:8 — “Blessed is the man to whom the Lord will not impute sin.”

That debt account is closed!  God will not put sin debt into the account of the one that He has justified!

Now someone night say, “This concerned Abraham, and God counting him righteous, but what about the rest of us?”, or more directly, “What about me, can I count on these promises?”

Let us look to the scripture for this answer, for the Apostle’s words from the Lord are clear:

Romans 4:23 – 25 — “Now it was not written for his sake alone, that it was imputed to him; But for us also, to whom it shall be imputed, if we believe on Him that raised up Jesus our Lord from the dead; Who was delivered for our offences, and was raised again for our justification.”

Praise to God our Father and the Lord Jesus Christ for settled accounts!