And He is the head of the body, the church…(Colossians 1:18a)

Here in our study of the glory of the person of Christ, we see that in His assembly, He is also first.  The assembly which we speak of here is “the church, which is His body” (Ephesians 1:22-23).  To speak in precise terminology, and to speak of things in the way that God’s Word speaks, the important term to use to describe the group that Christ calls His own should not be “church” or “Church”, but σῶμα Χριστοῦ—”Body of Christ”.  When we see this term, we know exactly what group is being spoken of.  If only the term ἐκκλησία is used, it is important to know which ἐκκλησία (usually translated church, see end note) is being addressed.  Often it is a local group or assembly of people.  It is that simple.  It has unfortunately turned into a theological term, and with that, the dogmatic assertions about the “Church” that follow.

But here, we are not talking about the body, but the Head.

Christ is the Head of the church which is His Body!  Since He is the Head, the body functions only because it is in vital union to Him.  This understanding of Christ as the Head in relation to the body also keeps within the context of the passage—as the Head, He has preeminence in the body.  It should go without saying that body is subject to the Head, not as in bondage, but in proper relation, where the body does all according to the desires of the Head.  Every member of the human body is connected to the head, or the mind, the controlling entity.   Now there is a physical union in the human body, and in the Body of Christ it is a spiritual union.  The members of this Body of Christ are placed in this union by God’s working.  It is the operation of God (Colossians 2:12), and it is the Holy Spirit’s specific ministry:

So was there a time when Christ began to be the Head of the Church which is His Body?  According to Ephesians 1, it was after He ascended, and after He sat down at the right hand of the Father in Heaven:

Which He wrought in Christ, when He raised Him from the dead, and set Him at His own right hand in the heavenly places, Far above all principality, and power, and might, and dominion, and every name that is named, not only in this world, but also in that which is to come: And hath put all things under His feet, and gave Him to be the Head over all things to the church, Which is His body, the fulness of Him that filleth all in all. (Ephesians 1:20-23) 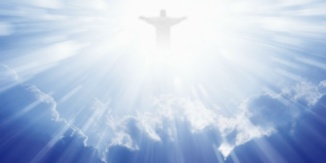 So our understanding of Christ in His position as Head of the Body must be understood as His ministry as ascended and seated in Heaven.  True Christianity begins with Christ seated FAR ABOVE ALL.  This is where He is as Head of the Body.  Now the place which the Head occupies is also the place which the body is truly at home.  Little wonder that Paul solidified the position of Christ ascended and seated far above all before explaining the place that is occupied by His saints:

Which He wrought in Christ, when He raised Him from the dead, and set Him at His own right hand in the heavenly places, Far above all principality, and power, and might, and dominion, and every name that is named, not only in this world, but also in that which is to come…And hath raised us up together, and made us sit together in heavenly places in Christ Jesus… (Ephesians 1:20-22, 2:6) 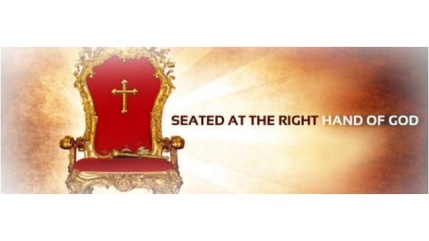 This should give us the proper perspective of the greatness of God’s love and mercy toward sinners who are only deserving of His wrath.  It is great love that He should die for us to save us (see Romans 5:8).  It is great love that imparts to those believing everlasting life (see John 3:16, Romans 6:23).  Now, think of the great love that seats the sinners which He shed His blood to save with Him, far above all!  This was also the most important doctrinal point to establish in Paul’s teaching here in Colossians about the greatness and exaltation of Christ.  It is to establish in our minds where He is to keep our minds fixed to the place where we should occupy because we are members of His Body, of His flesh, and of His bones (Ephesians 5:30).

If ye then be risen with Christ, seek those things which are above, where Christ sitteth on the right hand of God. Set your affection on things above, not on things on the earth. For ye are dead, and your life is hid with Christ in God. When Christ, Who is our life, shall appear, then shall ye also appear with Him in glory. (Colossians 3:1-4)

The truth that the Scripture places forth about the risen and ascended position of Christ at the right hand of the Father in heaven is far more glorious than the common understanding that most of us have of Him being the One in charge of our local churches.  This position as the Head of the Body is that of the beginning of an entirely new creation that God is presently creating.

Therefore if any man be in Christ, he is a new creature: old things are passed away; behold, all things are become new. (2 Corinthians 5:17)

This new creation is nothing less than a wholly (and holy) new man which is being conformed to His image.  He is calling out His ekklēsia and forming this new man.  This new man is not under the dying headship of Adam, but under the ever-living headship of our Lord Jesus Christ, the Lord from Heaven (1 Corinthians 15:47).

In Ephesians, Paul wrote of the gifts that the Lord has given to His Body speaking of the way we grow into our position in Him.  These gifts are often the people who he has given from among men:

For the perfecting of the saints, for the work of the ministry, for the edifying of the body of Christ: Till we all come in the unity of the faith, and of the knowledge of the Son of God, unto a perfect man, unto the measure of the stature of the fulness of Christ: That we henceforth be no more children, tossed to and fro, and carried about with every wind of doctrine, by the sleight of men, and cunning craftiness, whereby they lie in wait to deceive; But speaking the truth in love, may grow up into Him in all things, which is the Head, even Christ: From Whom the whole body fitly joined together and compacted by that which every joint supplieth, according to the effectual working in the measure of every part, maketh increase of the body unto the edifying of itself in love. (Ephesians 4:12-16)

We often wish that He would make this creation instant, but His ways are much better than ours, and since we will have eternity to understand why He does things the way that He does, we will trust Him and allow that His ways are much better than ours.  The new creation that is the Body of Christ is not formed from nothing, nor from dust, but from Adam’s dead race.  That He could take marred vessels fit for destruction and turn them into trophies of His grace (Ephesians 2:7-10) is truly a fantastic feat that we will be in awe of for ages to come.

Even better, the opportunity and call to every one of us living on this earth is to believe on Him and His finished work of redemption for us—for me and you—and accept this position as a member of His body.  Jesus Christ died for our sins, yours and mine, and God only requires that we believe the testimony about Him and accept His free gift.  He finished the job and rose from the dead to prove that sin is paid for and death is defeated.  Our place in this is to take Him at His word and believe what He has said.  It is that simple.  We do not have to change our ways and doings to be accepted of Him.  We need to believe on Him and the Holy Spirit will baptize us into His Body (1 Corinthians 12:13), which He will form into that perfect man.  We cannot change ourselves, we need to be created anew, and that is the promise that He will deliver on.

BELIEVE ON THE LORD JESUS CHRIST AND THOU SHALT BE SAVED…

See some examples of ἐκκλησία from the Old Testament

One thought on “Christ the Head” Leave a comment ›